In this report we analyze how exchange rate fluctuations affect the hospitality industry. We consider the case of Switzerland, which is a small open economy located in the heart of the European monetary union. 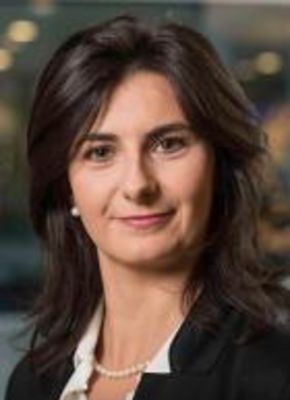 Switzerland is a very special country because, thanks to its stability, it has always been considered a safe haven where international investors put their resources when there is economic turmoil and uncertainty in the rest of the world. The combination of these two features - a high degree of openness and a currency which has a tendency to appreciate - makes Switzerland a very interesting case study. Why? Because a strong currency reduces the ability of Switzerland to trade.

In particular, Hospitality and Tourism industries fall into the category of export-oriented sectors because they export services. When we export goods, we physically move a good from the country where it has been produced to a foreign country where it is going to be consumed. In the case of services, instead, we export a service whenever the consumer (resident in a foreign country, the tourist) physically goes to the country of the producer, where he/she consumes the service. Consider for example a German resident going on holiday to the UK. Any night spent in a UK hotel is considered as an export from UK to Germany.

As explained in Table 1, a stronger Swiss franc not only reduces Germans' incentives to go to Switzerland for their holidays, but also stimulates Swiss people to go to Germany for their vacation, given their relatively high purchasing power abroad.

Switzerland has historically been perceived as a "safe haven". During turmoil, investors have a tendency to buy Swiss francs which produces the effect of strengthening the currency. In Figure , we show an index which represents the exchange rate between the Swiss franc and several other currencies. An increase in the index is an appreciation of the Swiss franc. As you can observe, we had strong appreciations during and after the 2008 Great Recession, as well as during the COVID-19, which was born as a health crisis, but soon turned into an economic crisis.

Figure 1: Nominal exchange rate between the Swiss franc and a set of other currencies 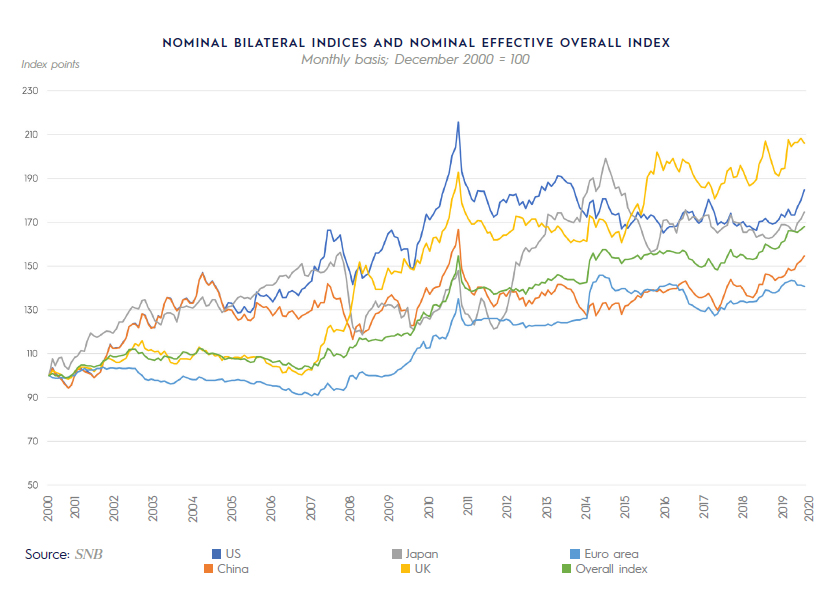 Figure 2: Exchange rate between CHF and Euro. How many CHF for 1 Euro. 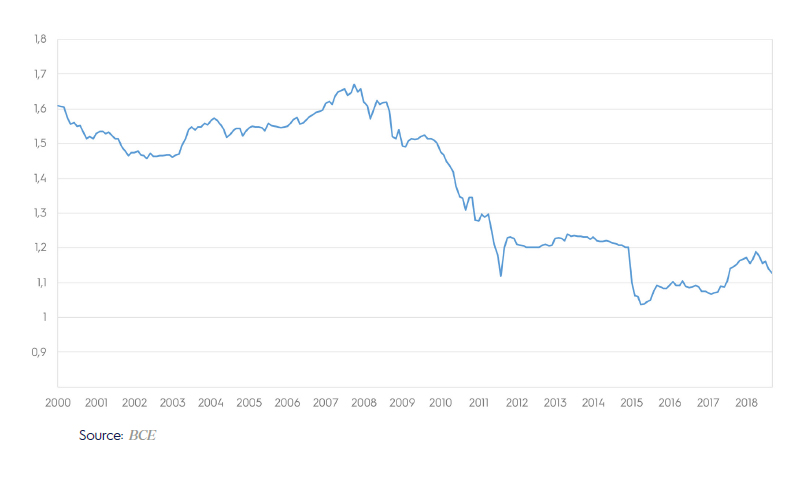 If we focus more specifically on the exchange rate between the Swiss franc and euro and on the period between 2000 and 2018 (Figure 2), we can see that in 2000 the exchange rate between CHF and euro was 1.6 (1.6 CHF for 1 euro), while starting from the world financial crisis in 2008, we observe a progressive strengthening of the Swiss franc. During the crisis, Switzerland was perceived as a safe haven, which explains why investors started to strongly buy Swiss francs. Such a high demand increased the value of the Swiss franc, which almost reached parity with the euro (1 CHF = 1 euro) in 2011. This is why the Swiss National Bank (SNB) intervened in September 2011 introducing a limit to Swiss franc appreciations with respect to the euro. With this intervention, the SNB committed to acting on the forex market with the goal of preventing the exchange rate to go below 1.2 CHF for 1 euro. This intervention lasted until January 2015, when the SNB decided that it was time to let the exchange rate freely fluctuate. As you can see from the picture, that same day, the CHF strongly appreciated and reached parity with the euro (1 CHF for 1 euro).

Having observed the fluctuations in hotel demand and pricing, we study whether these fluctuations are associated to exchange rate movements.

Hotel performance is surely related to local factors which go beyond hotel class and operation (business model). Northern areas of Switzerland seem to be more exposed to international competition and react more to exchange rate fluctuations. Southern and central areas are more touristic, but somehow seem more protected from international competition. One reason might be that their prices are relatively low with respect to the average Swiss hotel prices (central Switzerland) or another reason might be that their demand is quite rigid (Ticino for example has a relatively high average ADR and does not show any intention to reduce it because of exchange rate appreciations. Mountain regions have an average ADR but a relatively low occupancy).

Nevertheless, our results seem to suggest that chains and higher class hotels (luxury, upscale) have a better ability to insure themselves against exchange rate fluctuations. If necessary, independent hotels also limit their losses, but in a way that is different from chains. Independent hotels simply do not react to shocks at all, while chains are more prone to change prices in response to market forces.

Data suggest that over time the market is expanding in a stronger way in the regions that better react to exchange rate appreciations (Figure 3): Lake Geneva and Northern Switzerland. In fact, even if during the last decade hotels in this region had to face some negative shocks that implied some losses, we should always remember that, on average, their performance is well above the one of all the other parts of Switzerland.

Similarly, we observe in the last twenty years an important increase in luxury and upper scale hotels (Figure 4), and chains (Figure 5), which seems quite consistent with our results. 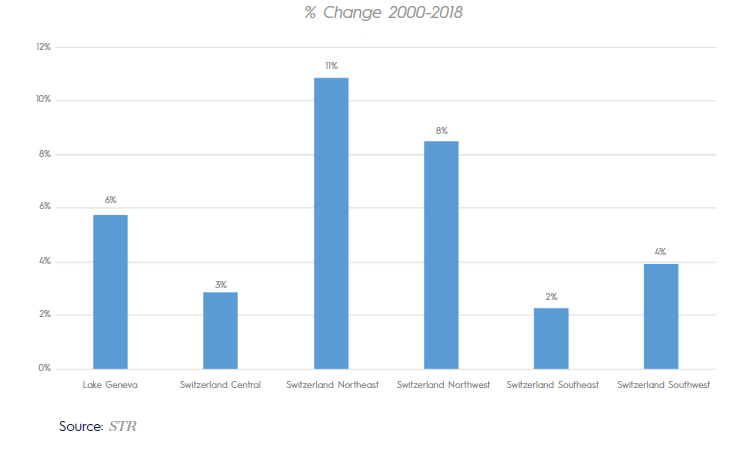 We also observe a larger increase in chains and franchises rather than in independent hotels, which still represent the vast majority of hotels in Switzerland. 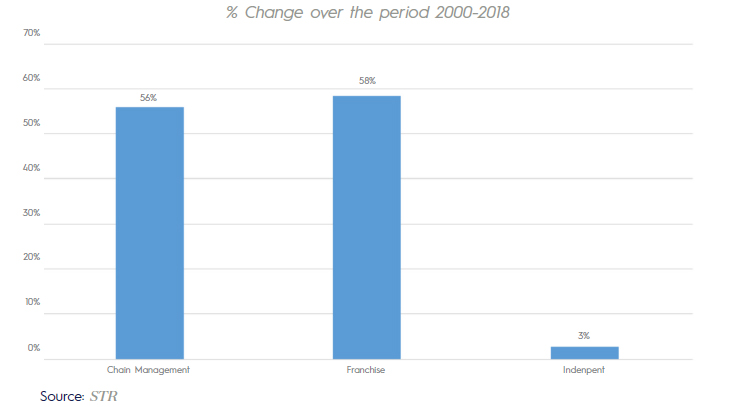 The present study was conducted before the COVID-19, using data between 2000 and 2018. Nevertheless, its main implications may apply also now. During the first months of this health crisis that soon turned into an economic crisis, the Swiss franc in fact showed a tendency to appreciate towards most of the currencies (Figure 1), replicating a situation similar to the one that we observed during the 2008 crisis. Future research will have to delve deeper into the analysis to understand whether the recent franc appreciations produced similar results on the hotel industry as the ones that we observed during and immediately after the Great Recession of 2008.

Dr Isabella Blengini, is an Associate at EHL Hospitality Business School. Her research interests include exchange rate movements, expectations, international capital flows, financial crises optimal monetary policy and portfolio choices.Isabella teaches in the bachelor program the courses of microeconomics and hospitality economics. After taking her Ph.D. at Boston College, she did a post-doc at the University of Lausanne. She has been visiting fellow in the economics department at MIT and summer intern at the Boston Fed.